What is the Fast Release Option? Why did we add The Fast Release option?Bitoff felt a necessity to simplify processes for both Shoppers and Earners. Earners have to wait for the delivery of purchased items to get their BTC/Thether. Sometimes, it could take months as the products are transferred from different countries such as China. In this case, the delivery time could be an irritating issue for the Earners, and the shoppers need to make sure that Earners will receive their order as soon as possible. To solve these problems, we came up with a new feature called Fast Release.Fast Release is an incentive for both Shoppers and Earners.While placing orders on Bitoff, the shoppers can make sure that their order will be picked up quicker, and the Earners can receive their BTC as soon as the item is sent!How does this work? What are the details?The Fast Release option is a possibility for transferring Bitcoin or Tether from Shopper's wallet into Earner's wallet when the order is SHIPPED from Amazon.In regular orders, the BTC releases when the products are delivered and confirmed by the Shopper. 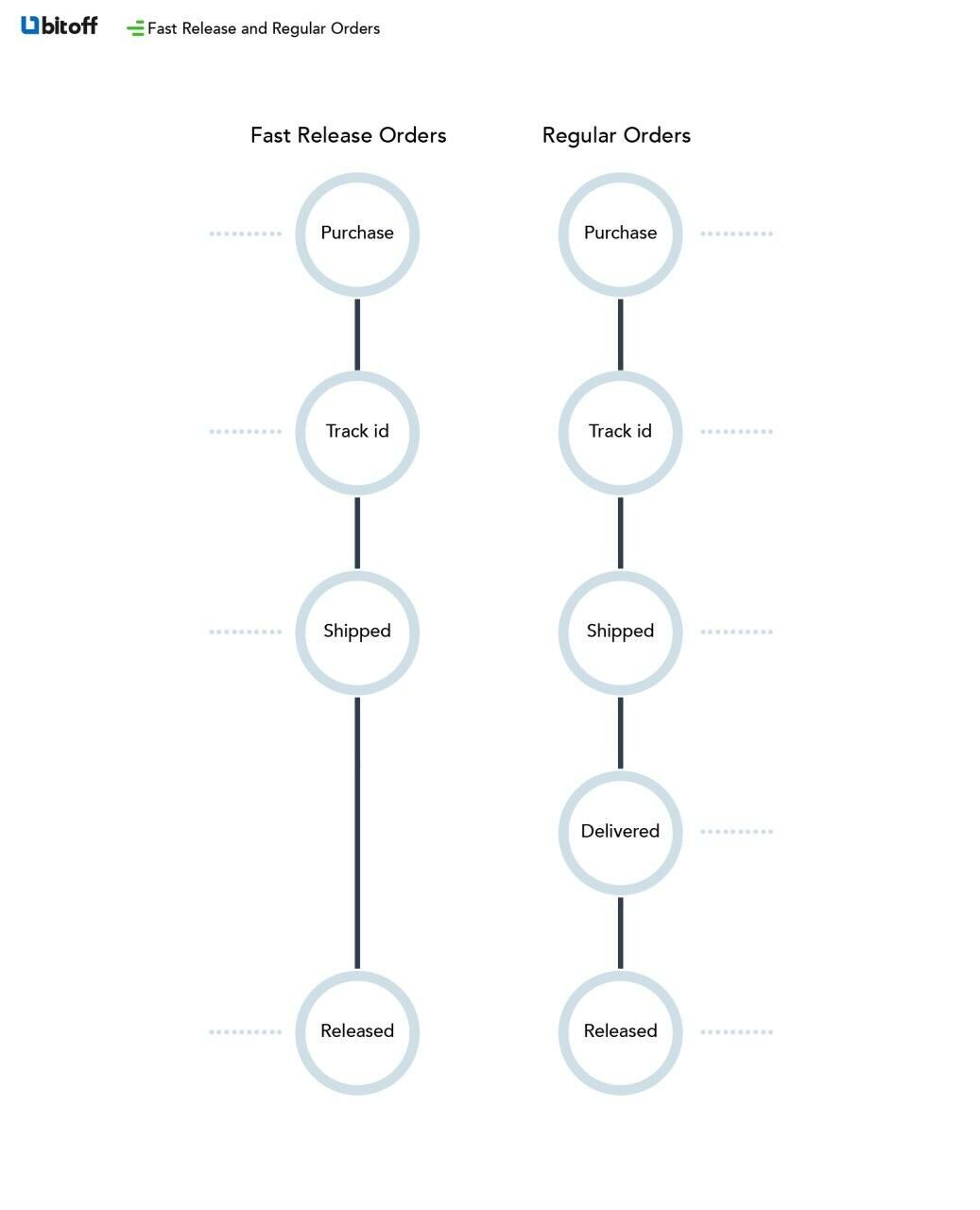 How to use the Fast Release option:The Shopper Stage:The Shoppers can use the Fast release option by enabling a tick before placing the order. Shoppers can enable the Fast Release tag for any order they wish to be picked up soon or that has a late delivery. Then, there would be a "Fast Release" tag beside the order so that Earners will see and understand that if they pick up the order; they will receive the BTC once it is shipped.keep in mind that Shoppers can make sure that their orders will be picked up sooner without any extra cost!In case Shoppers want to change the order, they can cancel their fast release order before any Earner picks it up and place another order.The Earner Stage:If Earners wish to benefit from the fast release option, they need to become VIP Member on Bitoff first.At first, Earners need to make sure that they have enough BTC in their wallets. Bitoff escrow will keep 0.05 BTC or less of the Earner's balance after enabling the VIP membership. It is as insurance for releasing the BTC sooner into Earner's wallet.Although VIP Earners are capable of picking up more orders, there are some limitations too. Based on the Earner's level, the pledge amount is different, and also there is a maximum value for processing orders as it is shown in the chart below:

Each order that either gets completed or canceled, spaces up the limitation so that Earners can add and pick up more fast release orders.If an Earner levels up , they can send a ticket to Bitoff's support team to get the difference pawn back ASAP.If the Earner wants to cancel the VIP membership , they need to contact the support team to get their whole BTC back (It takes 30 days). Here are the "Fast Release" advantages wrapped up for both Shoppers and Earners:Shoppers can place an order easily with the fast release option because their orders will be picked up sooner since the Earners are more eager to pick up the Fast Release orders, without an extra fee. Earners, on the other hand, are at peace of mind as they will receive their BTC amount soon after the order is shipped from Amazon. Earners will no longer wait for the item to be delivered and will receive their BTC without worrying about the delivery time or any delay transfer issues.Fast Release order's support:The Fast Release order's support is the same as other orders. Suppose the Shopper releases the BTC after the shipping but did not receive the parcel. Bitoff escrow will transfer back the BTC into the Shopper's wallet again.So, in case you face any issues, need any help, or have any question, you know that Bitoff Support is just a click away.Enabling the fast release tag/option for orders will permit Bitoff escrow to transfer the Bitcoin / Tether as soon as the order is shipped based on the Amazon tracking link from the Shopper's wallet into the Earner's wallet. However, it still requires Shopper confirmation.

Was this article helpful?